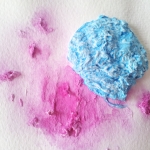 Adam Willetts is a local Christchurch artist, who works in both the visual and sonic arts. Using a modular synthesizer he composes and performs live electronic music crafting percussive and textural pieces that are raw and minimal yet ceaselessly shifting, fracturing, collapsing, transforming and evolving.

Born in the UK, Asteroid Anxiety was trapped in Russia for many years before escaping to New Zealand in 2013. He fled over the ice with rudimentary instruments cobbled together from Soviet space program castaways and nuclear industry detritus, saving them from destruction at the hands of Orthodox vigilantes. Early murmurings about debilitating bucolic influences proved deceptive. Asteroid Anxiety’s music has been described as “darkly melancholy”, “mordantly soothing”, and “making you feel like you’re on a spaceship that has just crashed”.

Nicolas Woollaston, creative technologist, delights in designing and playing with electronic gadgetry, making wonderful and strange noises. He combines human and electronic vocalisations to present a seething and soothing soundscape of drones and wails.