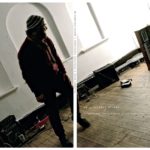 An Audacious Decade celebrates ten years of the Borderline Ballroom – an arts collective and group of friends who have been instrumental in building Canterbury’s Sound Community. This group exhibition both documents the decade through images and sonic artefacts, and features new ambisonic, intermedia, and oenosthetic installations by Malcolm Riddoch, Nicolas Woollaston, Adam Willetts and Jo Burzynska.

Join us for a preview of the exhibition, the opening of An Audacious Decade four-day festival, as well as the launch a special commemorative publication, An Audacious Decade, featuring documentary photography from CSSA members and essays from Jo Burzynska, Bruce Russell, David Khan, James Hope, and Malcolm Riddoch.

Wines for the opening supplied by Pegasus Bay.

Ghosts of Auricles Past
Malcolm Riddoch

Featuring spatial recordings of audience outtakes from Auricles past, this sonic intervention mixes the present and past of the gallery’s sonic space and time. The artwork seeks to immerse a present audience in a living, shared sonic heritage, and invites an openness to the sonic future of Auricles past and present.

Malcolm Riddoch’s sonic arts practice melds experimental electroacoustic techniques and phenomenological method in an investigation of acousmatic listening and the electronic transformation of soundscapes; notions of indeterminacy in composition for installation and performance; the use of whole acoustic spaces in sound art installation and music performance; and electroacoustic feedback as an embodied, intentional, temporalizing process. His medium is non-tonal, timbrally focused and technologically organised sound, where thematic dissolution is his sonic theme.
http://malcolmriddoch.com/

Adam Willetts is exhibiting two pieces in the Audacious Decade exhibition. A new work called Light Chimes in which a number of simple solar engines perform an evolving sound work on pentatonic chimes, and also a DIY synth that he built in 2008 using circuit designs by Nicolas Woollaston.

Adam Willetts is a sonic and visual artist based in Christchurch. He works across a wide range of media from the high tech to the very low tech and handcrafted.

The Fall of Water
Nicolas Woollaston

Listen to the rhythms of water whose periodic patterns have been the governor for all of human history and indeed all of life’s time on Earth. Listen for the rhythmic patterns, listen for the chaotic missteps. The ways of water tread a fine line between order and chaos, which perhaps tells us less about water and more about the way our minds distinguish order from chaos. Water is the yard-stick that humanity can use to calibrate all our relations with the Earth.

Nicolas Woollaston is a Christchurch artist.

Amazuppai uses the interactions between sound and wine to explore the physical sensations, conceptual contrasts and subconscious synergies of ‘sweet and sour’. The knife-edge balance between these two contrary but often complimentary tastes and their semantic associations is explored in Amazuppai (the Japanese for sweet-sour, comparable to the idea of bittersweet); reinforced and destabilised through the interplay of a crisp off-dry Riesling with a modulating soundscape. Presented over the Audacious Decade festival days.

Jo Burzynska is a sound artist and wine writer whose work in these areas has increasingly converged in the production of multisensory art. Her installations and performances are regularly created at the intersection of the senses, combining sound and taste, which is also the topic of her current doctoral research. Joburzynska.com