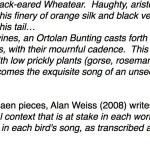 Although listening is often construed as a neutral and private act of perception, of reception, it is highly regulated, prescribed, controlled, by a variety of institutions and social forces. Specific modes of listening are produced and encouraged by means of marketing, music writing and criticism, and popular and scholarly studies, but also by the very cultural structures of power and identity into which music is played, within which or from which listening is performed. By creating unknowns in the music, at the level of the score, or at the level of the performance, I want to call into question the ways in which I hear the sounds, the modes in which we listen.

Gust Burns makes work that is woven through several major discourses including jazz, composition, improvisation, and cultural studies. Born in Tacoma, he moves between Seattle, New York, and California. With a history as an improvising pianist, Burns makes music by utilizing multiple materials and procedures, creating performances, scores, and texts that intertwine the conceptual and sonic, critical and affective, while engaging space and site. Burns directed the Seattle Improvised Music Festival from 2004 to 2014. His piano duo with Craig Taborn performs regularly. Burns has performed and exhibited work in New York, Tokyo, Bay Area, Los Angeles, Portland, Seattle, Vancouver, and Toronto. His most recent exhibition, review studies, at Seattle’s Gallery 4Culture in 2013, featured readings of Rolling Stone and Downbeat Magazine record reviews, recorded in the Chuckanut Mountains, presented on dubplate records and digital audio files.

« Back to Transnational Express