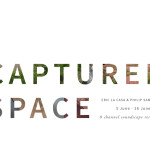 Captured Space is an 8 channel soundscape recording and collaborative artistic project that occupies two parallel environments – the natural and the constructed. Whilst the natural world of South Africa’s Kruger National Park is wild and occasionally ferocious, the constructed world of roads and settlements is pedestrian, designed to keep visitors comfortable and safe from the daily struggle of life and death. From the vantage point of the car one can witness an extraordinary habitat comprising a familiar cast of characters. Yet no matter how far or wide one travels one cannot easily escape the confined space of the car or the high voltage electric fence encircling the tourist resort. Whilst African animals are the mainstay of zoos around the world, at Kruger the animals are the vigilant keepers of an exotic mix of people confined to the smallest of spaces for their own self preservation.

Eric La Casa is a Paris based sound artist whose sonic arts practice since the mid 90s has focussed on the listening environment, creating sonic forms and ways of listening in sound installations and musical works composed entirely from his field recordings.

Dr Philip Samartzis is Associate Professor in Sculpture, Sound and Spatial Practice at the School of Art, RMIT University in Melbourne and one of Australia’s best known and most accomplished sound artists having performed and exhibited internationally over the last two decades. His current practice involves the exploration of sound art, acoustic ecology and spatial sound.