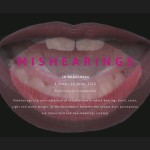 Mishearings, by Jo Burzynska (aka Stanier Black-Five), is a collection of sound-based installations that use the interaction of the senses to alter or intensify perceptions through the combination of sensory stimuli. Burzynska draws both on her own studies in sound and taste and current psychological research into crossmodal correspondences. These have shown that the senses can have a powerful influence over each other, with the conceptual elements of each exhibit achieved or intensified by employing auditory illusions.

In Hearing Lips and Seeing Voices Burzynska presents an audio-visual poem that can be perceived in three ways that offer up very different meanings. This uses the “McGurk Effect”, an illusion that occurs when the auditory component of one word is paired with the visual component of another, leading the viewer to perceive a third different word. Bittersweet is a work for 8 speakers and chocolate. This soundscape, created from the sounds of food production, cycles between low pitched industrial drones and high pastoral frequencies, which change the perception of the flavour of the chocolate from bitter to sweet.

The brain’s ability to construct meaning through noise is harnessed in Poetry as I need it, an exploration of sound, silence, form and time using John Cage’s Lecture on Nothing. And all the senses entwine in Carbonic oscillation, a chamber offering a highly visceral experience of effervescence, which participants are encouraged to experience with a glass of sparkling wine.

Burzynska will also be hosting a series of multisensory events over the month of the exhi-bition:

Jo Burzynska – who also records and performs under the name Stanier Black-Five – is a Christchurch-based sound artist and wine writer whose work in these areas has increas-ingly converged in the production of multisensory art. Her installations and performances regularly combine sound and taste, created at the intersection of the senses. Recent work includes the public installations Resonifying the city in Cathedral Square, Christchurch (2014); 150 years of rail at Ferrymead Heritage Park in collaboration with Chris Reddington (2013); Stepping Out in Colombo Street, Christchurch (2013) and Oe-nosthesia at the Intereferenze FARM Festival in Tufo, Italy (2012).

Burzynska’s audio work is largely based on the manipulation of her own environmental re-cordings and has been performed and released internationally. Live performances include major festivals, such as the London Musicians Collective’s annual Festival of Experimental Music in the UK to New Zealand’s Lines of Flight Festival. Recent album releases include Body Waves and Avast! on the European Entr’acte label. As a writer on music, she has contributed to the likes of the UK’s The Wire magazine and wrote a chapter of the book Erewhon Calling: experimental sound in New Zealand. As a wine critic, she writes one of New Zealand’s most widely read weekly columns for the New Zealand Herald’s Viva magazine.

She is one of the founders of The Auricle Sonic Arts Gallery, where she curates The Auricle’s “oenosthetic” wine list, in which she matches wines to the current exhibition and the music playing in the space.

More information about Burzynska’s sound art can be found at stanierblackfive.com and wine writing at joburzynska.com.

For further details, pictures or to book a place at any of the events, contact {This email is obscured. Your must have javascript enabled to see it} 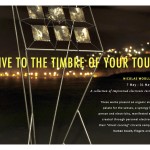 A collection of improvised electronic instruments by Nicolas Woollaston

These works present an organic electronic palate for the senses, a synergy between person and electricity, manifested as sound created through personal electronics and their “direct carving” circuits completed by human touch, fingers and hands. Gallery participants are invited to freely explore the touch sensitive timbral possibilities of each machine.

Nicolas Woollaston is a creative technologist who has a passion for closing the gap between production and consumption, for electronic gadgetry, for wonderful and strange noises, for making it all personal. 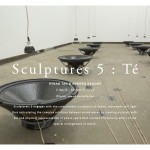 sculptures: 5 is a kinetic sound installation that binds together multiple senses through audio signal. This continues an engagement with the translation of sonic materials by cross-modally working between sound, movement and light. This work articulates the complex relations of sound waves by creating a visual, audible and physical representation of phase space that realises the sensory affect of the spatial arrangement of waves.

Andrew Brooks is a Sydney ­based artist, writer, curator and organiser whose work takes the form of installations, performances, text works and sound recordings. 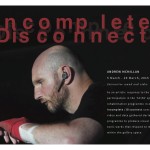 As an artistic response to the artist’s participation in the ‘SCIPA’ spinal rehabilitation programme in 2013, Incomplete / Disconnect uses audio, video and data gathered during the programme to produce visual and sonic works that respond to movement within the gallery space.

Andrew McMillan is an improviser, composer and sound artist based in Auckland, New Zealand. Since a spinal injury in 2004 Andrew has been looking for ways to keep active and continue making music and sound work through his improvising, composition and collaborative work in theatre, dance, film and T.V. 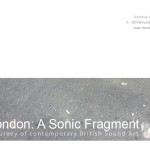 Sonic Fragment is an ambitious group show that brings together contemporary sound artists congregating in London, England. Despite tough living conditions, for artists especially, the capital still attracts and fosters a rich sound art scene. Their sonic concerns are varied as they are broad, travelling across spaces: galleries, nightclubs, squat parties, academic institutions and site specific work. Sonic Fragment aims to provide a glimpse of the cross disciplinary activities and shifting terrain of sound art emanating from the capital. London’s vibrant scene is installed into and pouring out of the Auricle.

The exhibition is curated by London based artist Justyna Burzynska. 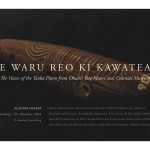 Many taoka pūoro (musical instruments of the NZ Māori) lie silent in museum collections throughout Aotearoa and the world and have not been played for the decades if not centuries since they were first collected. The voices of the taoka tāwhito (ancient treasures) in this composition are from taoka pūoro that reside in the collection of Okain’s Bay Māori and Colonial Museum, Banks Peninsula.

Alistair Fraser (B.Mus) is a taoka pūoro performer, researcher, maker, composer and music producer and in 2011 was awarded a Creative New Zealand Department of Conservation Wild Creations Artist Residency which resulted in a touring exhibit and an album of music titled ‘Rakiura’. In 2014 Alistair performed taoka pūoro with NZ String Quartet, in Anthony Richie’s opera ‘This Other Eden’, in Louise Potiki-Bryant’s dance piece ‘Whakaahua’ and with ‘Trinity Roots and their Irish Friends’.

Momentum is a collaborative composition in 12 movements, one for each month of 2012. The work was created over the course of the year with over 60 people from around the world contributing sounds to be included. All 12 compositions are arranged in 12 individual ambisonic channels allowing the listener to move around the gallery space and thus the 12 months of the year.

Nat Grant is a Melbourne Australia based sonic artist whose work explores the intersections between improvisation, chance, and intention in the development of sound as a sculptural medium. Through the integration of electronic processing and sampling with acoustic sound recordings, she creates cumulative sound works that link consciousness and memory, allowing interaction between human and natural environments. 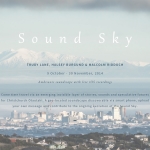 Come time travel via this emerging invisible layer of stories, sounds and speculative futures for Christchurch. Sound Sky is a geo-located audioscape that is discoverable via mobile phone. Upload a message via the iOS app or the installed exhibition iPad and contribute to the ongoing evolution of the Christchurch Sound Sky.

Sound Sky at the Auricle is brought to you by Trudy Lane (Auck) & Halsey Burgund (US) in collaboration with Dr Malcolm Riddoch from the Cantabrian Society of Sonic Artists (CSSA). 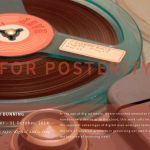 On the tape, a family’s audio diary from 1958 to 1967. In the last entry, the parents of the family explain to the youngest son the reason for making the recordings. “It’s for posterity,” the father explains. The mother adds, “for your children, and your chi…” She is interrupted and soon the tape ends. This installation is a document of the artist’s attempt to reunite the tape with its makers. The uncanny experience of a disembodied voice playing through a piece of obsolete technology, a ghost in the machine. In the age of digital media, where memories as photographs, videos and audio recordings exist only as numbers on hard-drives and CDs, or online on a distant server, the work calls into question the apparent advantages of digital over analogue technologies; the role of physical artefacts in preserving our own histories; and the function of archiving itself. Recent debates about online privacy focus on the traces of ourselves we leave behind, the ‘right to be forgotten,’ and the implications of policing this on freedom of speech and censorship. These themes are also explored in the installation through the choices of presentation of personal and sensitive material.

Graham Dunning is a London based sonic artist whose practice deals with temporality, memory and narrative through sound, performance and installation, utilizing people’s discarded memories and the function of archiving via found objects, photographs and recordings. Experimentation is fundamental and his practice is often informed by scientific or archaeological protocols.
www.grahamdunning.com 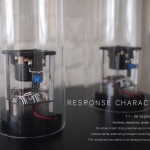 Response Characters – Arduinos, electronics, acrylic tubing & sound. Six tubes are used to impart strong resonances on sound recording and playback circuits in each tube. Each circuit independently alternates between recording sound and playing back its recording. The sounds recorded are a combination of the sounds produced by the other tubes, the ambient sounds of the space and, the resonance of the tube. In this way, the combined soundfield is an emergent property of the six tubes, that is, each tube’s sound is dependent on the contributions of the others.
Incidental Speakers – Loudspeakers, (9 cm x 9 cm x 9 cm)
These sonic sculptures engage with the ideas inherent in using sound as a medium for art while not employing sound as a medium. This ongoing series of works uses the loudspeaker as a conduit to explore ideas of the use of sound in art. While none of the speakers produce sound, they each attempt to express ideas of our aural experience. By omitting sonic phenomena from sound art, we can examine issues around sonic practice without recourse to the inherent visceral experience of sound.

Ted Apel is a sound artist whose sculptures and installations focus on the audio transducing element as the source of visual and sonic material. He has exhibited his work at sound art festivals and exhibits in the US, Poland, Canada, Austria and Germany. He received his M.A. in electroacoustic music at Dartmouth College and a Ph.D. in computer music at the University of California, San Diego. He currently lectures in Electronic Music / Sonic Arts at the New Zealand School of Music, Victoria University, Wellington, New Zealand.
vud.org