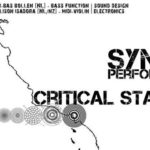 Extreme weather, colony collapse disorder in bees, melting polar ice, rising sea-levels – all examples of trends that can be directly related to human actions. However, other events such as the 1953 flood in the Netherlands, the February 2011 earthquake in Christchurch and the 2016 7.8 earthquake that changed the shape of the east coast of the South Island expose a more complex relationship between humans and the planet.

Our relationship with the earth is dynamic. Our actions influence our environment, which in turn responds, not always in ways we can foresee. Often there is a specific tipping point, after which there is no return. The preceding state is critical.

CRITICAL STATE embraces the oppositional forces that human beings contain within them – the desire for control on the one hand and the need to be able to respond with flexibility, on the other. How do we balance our needs and desires with the needs and desires of the other?

Inspired by sounds from natural disasters and the dynamic properties of these phenomena, SYNC explores a sonic environment that oscillates between slowly evolving textures and moments of unpredictable audio disruption. The musicians respond to and have influence on their audio surroundings through a combination of improvised and composed material.

SYNC is the composer/performer duo Jan-Bas Bollen (NL) and Alison Isadora(NZ/NL). Over the last 19 years they have created a number of compelling works within an interactive electronic environment: Trace (2008), concerned with the dynamics of trauma on a political and personal level; Born and Bred (2001) dealing with issues of citizenship and belonging; The Deep South (2002) inspired by NZ geography and
The Big Shop (1998), a critical approach to consumerism. See: https://jbali.home.xs4all.nl/SYNC_HOME.html

Alison Isadora is a composer, performer and educator born and bred in Aotearoa/New Zealand and practising in the Netherlands since 1986. She studied political philosophy and music at the Victoria University of Wellington, violin and composition at the Hague Conservatorium and post-graduate performance theater at DasArts in Amsterdam. In the last years she has become increasingly interested in the possibilities of connecting music to other disciplines. Isadora’s works often incorporate elements of story-telling and participation while addressing social issues. She is the Creative New Zealand/Jack C. Richards Composer-in-Residence at Te Kōkī New Zealand School of Music, Wellington for 2016/17.

Jan-Bas Bollen studied at the Sweelinck Conservatorium Amsterdam and the Royal Conservatory The Hague. He is internationally active as a composer, sound designer, bass player and educator, and creates both chamber music as well as music for ensembles, theatre productions and installation art. In many of his works he uses electronics, often employing cutting-edge technologies. Hij regularly collaborates with dansers and choreographers. His recent compositions include works for RedEar Rotterdam, Trio 7090, David Kweksilber Big Band, pianist Gerard Bouwhuis, Percussion The Hague, Club Guy & Roni, the Royal New Zealand Ballet and several radiophonic productions.