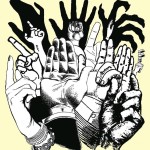 The Auricle is proud to present its inaugural exhibition, Ekklesia by local artist, Matthew Scobie, which marks the official opening of the gallery. Posing the question: “What is the biggest problem you face living in Christchurch right now?” Ekklesia is a dynamic electroacoustic installation created from public responses recorded both before and over the course of the exhibition.

In Ekklesia the voices of the city’s people are both its medium and its message. Visitors to the exhibition are also invited to contribute their concerns to the work, which over the two weeks of the show will build in intensity to reflect the size of the problem collectively faced by the community. The interactive and constantly evolving nature of the work reflects the idea of the ekklesia, where everyone gets an equal say and everyone has to listen.

Matthew Scobie is a Christchurch artist whose work reflects his interest in political, environmental and social justice issues and has seen him collaborate across genres, including work with designer, Elle Plank presented at Auckland’s Art in the Dark. His musical background is diverse: from playing percussion and participating in more traditional ensembles in his youth, to performing in numerous rock bands, such as T54 and Planet of the Tapes. He studied sonic arts at the University of Canterbury, where he won the Lilburn Award for first in composition in both 2012 and 2013.