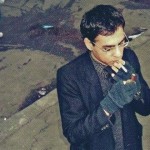 Kelsely Abaza is an Egyptian composer and producer of avant-garde electronic music working in New Zealand. Abaza will be performing ‘Experimental 2016’ (working title) – a selection of unreleased compositions.

In addition, ‘Mood Up the Mode’ – a standalone single by Kelsely Abaza – has been released for download on 12 December 2015. On 2 January 2016 Abaza released ‘Amira’, a more accessible tune of laid-back electronica dedicated to his sister. You may hear them at the Bandcamp link provided below.

The concert will be opened by Christchurch musician Michael Summerfield who will perform works specifically written for the occasion.