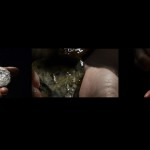 No ordinary stones these, and what better community to discuss the fate of things to come – a collection of song/stone voices from diverse geophysical sources.

A stand-alone work symbolizing harmony and solidarity, Fate of Things to Come was originally devised as a contribution to Lines in the Ocean, an exhibition in support of the establishment of a fully protected ocean sanctuary around the Kermadecs, a unique region of mostly underwater volcanoes located north of Aotearoa/New Zealand between White Island and Tonga. Five years of negotiation have finally succeeded with NZ Government announcing approval this year of the Kermadec Sanctuary proposal.
Full ratification will occur in April 2016)

Phil Dadson’s transdisciplinary practice includes digital video/audio and installation, performances and exhibitions, building experimental sonic objects, graphic scores, drawing, music composition and improvisations on invented instruments. Following membership of the foundation group for Scratch Orchestra (London, 1969, with Cornelius Cardew, Michael Parsons and others), Dadson returned to New Zealand to establish Scratch Orchestra (NZ), and later From Scratch (1974 – 2004), remembered as New Zealand’s most original rhythm/performance group, known internationally for its funky rhythms and compelling performances on original instruments. Appointed to the Elam School of Fine Arts Sculpture department in 1977, Dadson was made Head of Intermedia/Time-based arts in 1986; a position he held and was influential in until 2001 when he left to focus on his personal practice. He has been the recipient of many key awards and commissions including a Fulbright Cultural Travel Award to the USA, an Arts Foundation Laureate Award in 2001, Antarctica Artist Fellowship in 2003, ONZM in 2005 and various International research residencies including a Wallace/Fulbright Headlands residency award for 2016. He lives in Auckland with his wife Camilla and loves nothing more than drifting off shore in a kayak. He is represented by Trish Clark Gallery, Auckland.