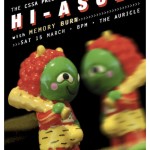 After a break of nearly 2 years, Hi Asobi (Peter Wright, David Khan, Antony Milton) are looking forward to presenting an electro-acoustic improvisation at the Auricle, this Saturday.

Hi Asobi emerged from the ruins of Chch in latter 2010, after evolving through the mnemonic surrogates Oshibori (the ear-splitting debut at Porto el Santo, Lyttelton) and the rather less-likely to induce crippling threshold-shift Kannazuki. Subsequently Hi-Asobi performed at Lines of Flight in 2011 – accompanied by Milton’s first fascinating excursions into video work. Releases are available on Bandcamp via Distant Bombs and Pseudoarcana. Look here:

Also featuring on the night are Memory Burn (Rory Dalley and Michael Minchington) who have been threatening to ‘do something’ with turntables!