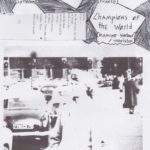 Noetinger is director of Metamkine, a non-profit organisation dedicated to the distribution of improvised and electroacoustic music.

Bruce Russell is a founding member and guitarist of the noise rock trio The Dead C and the free noise combo A Handful of Dust (with Alastair Galbraith). He has released solo albums featuring guitar and tape manipulation, and has contributed articles to British music magazine The Wire.

He established the Xpressway record label, which was active from 1985 until the early 1990s, releasing mostly cassettes and a few records. Russell then founded the Corpus Hermeticum record label. Xpressway released only music by New Zealanders, usually song-based. Corpus Hermeticum releases, in contrast, may feature New Zealand or international artists, and they eschew song forms in favor of free-form, experimental, usually improvised sounds.

Champions of the World are two derilict and shady characters who grew up in Sumner.