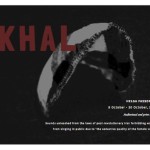 An iteration of Helga Fassonaki’s project Khal with the original 16 scores and recorded interpretations by the participating artists. In addition five local artists will be performing Fassonaki’s scores live on Friday 9 October at the Auricle Sonic Arts Gallery.

While residing in Tabriz, Iran for a month in 2014, Helga Fassonaki made 16 sculptural ‘scores’, which were sent abroad for 16 female artists to interpret. In order for these scores to be performed in a legal fashion, they had to be unleashed from the laws that rule post-revolutionary Iran, laws that forbid women from singing in public because of ‘the seductive quality of the female voice’. Sending these scores out into the world to be performed was an attempt to bring attention to this law whilst also acting as a gentle protest in the form of a disguised language traveling freely and unbound by governing law.

The scores, their performances and reinterpretations are collectively entitled ‘Khal’. Different iterations of Khal are being presented in galleries in the US and New Zealand in 2015 where the scores and their interpretations by the recipients of the scores are being displayed, heard, and reinterpreted – presenting the idea of a ‘living score’ as an archive open to edits, renewal and dialogue. As the series unfolds from one event to another, Fassonaki seeks to create a composition of voices and actions. Like the idea of Khal – a derogatory term in Farsi for Iranian Pop music that was sent to Iran by Iranian US immigrants in the form of homemade mixed tapes so that Iranian residents could listen to their country’s own pop stars.

Helga Fassonaki, a recent transplant to New York City, creates and curates sound and visual installations, group situations, films, and performances that utilize and question temporality, power structures, subcultures and the human body as a sculptor of sound in space. Floating between worlds of sound and visual art, Fassonaki borrows from one to set up the rhythms and pulses that inform the other.
www.helgafassonaki.net
Also see www.vimeo.com/album/3309705