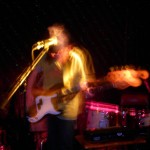 Birdation began a bedroom recording project while her bandmates from Bad Sav were overseas in 2011. Currently it serves as a vehicle for repetitive tropicana with heavy bass and layered vocals. Influenced by soundtracks from video games such as Mass Effect and theme tunes to tv shows like Mary Hartman, Mary Hartman.