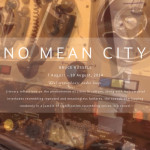 The Auricle is proud to present No Mean City by Bruce Russell, an exhibition that sounds short excerpts from texts on urbanism, and literary reflections on the phenomenon of cities in culture, along with recorded instrumental interludes resembling repeated and meaningless fanfares. The texts and other sounds overlap randomly in a jumble of signification, resembling voices in a crowd. The artist invites you to take a moment to reflect on what it means to be part of a city and to ponder on one’s own place in our urban culture.

From 8pm we invite you to stay on and celebrate the official opening of the Auricle’s “oenosthetic” Bar,  a dedicated Wine and Sound Bar that we believe to be the first of its kind in the world. Every month its wine list is curated to complement the current exhibition with wines matched to the sonic works playing in the space, starting with Bruce Russell’s  No Mean City.