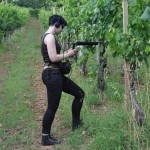 The Auricle Sonic Arts Gallery
Saturday June 13, 2015
8pm (prompt start for artist talk)
Koha – {This email is obscured. Your must have javascript enabled to see it}

Oenosthesia is a multi-sensory sound and taste project by Christchurch-based sound artist and wine writer Jo Burzynska (aka Stanier Black-Five). In this performed version (Oenosthesia III), Burzynska will be creating a live soundscape using recordings made in vineyards and wineries in Southern Italy that works with the characters of three different wines given to the audience at key points in the work.

In Oenosthesia III, Burzynska explores the way in which sound influences the perception of taste through the changing timbres and frequencies of the performance in combination with different styles of wine. This work both evolved and is created from wine, bringing together Burzynska’s two professional interests to create a unique experience based on the science of sensory interaction.

The work was initially created as an installation from a “Suoni dal confine” artist residency in Irpinia, Italy and premiered at the Interferenze New Art Festival’s Factory of Art Rurality and Media 2012 (FARM2012) in Tufo, Italy.

Before the performance, Burzynska will present a brief overview and discussion of the concepts and creative process behind the Oenosthesia project and the other works that are part of her multisensory Mishearings exhibition showing at The Auricle in June.

Burzynska is one of the country’s most widely read wine writers, penning regular columns in The Press, New Zealand Herald and Wine NZ and is the author of Wine Class: All You Need to Know About Wine in New Zealand (Random House). She is also an active sound artist, recording and performing under the name Stanier Black-Five, whose work in recent years has increasingly combined her interests in music and wine in a series of multisensory pieces and workshops.

More information about Burzynska’s wine writing can be found at joburzynska.com and her sound art at stanierblackfive.com.