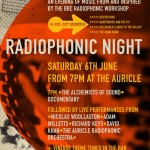 Journey back in time with the futuristic sounds of the BBC Radiophonic Workshop in a night of vintage music made and inspired by the legendary department. The evening blasts off with a film about the pioneering electronic studio, followed by radiophonic music playing all night in the bar and live performances upstairs from Nicolas Woollaston, Adam Willetts, Richard B. Keys, David Khan and the specially formed Auricle Radiophonic Orchestra.

Established in 1958 to produce new music and sound effects for radio and then television, it was responsible for classic tunes such as the original Dr Who theme to sound effects for the Goon Show. While much of its output still sounds amazingly modern, the sounds of its classic era were created using very basic equipment, such as old test equipment and tape recorders. Employing the techniques of musique concrète, natural sounds – often of everyday objects – were recorded, manipulated and transformed into the often highly atmospheric soundtracks for which the workshop became known.