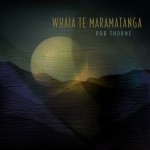 Rob Thorne (Ngati Tumutumu) is stopping by the Auricle this coming Saturday on his Aotearoa New Zealand tour to perform music from his Rattle debut album, Whāia te Māramatanga and hold an afternoon workshop on taonga pūoro, the traditional Māori instruments that he uses in his music practice.!

“Whāia Te Māramatanga is a musical passage of identity and connection. It is a journey of knowledge through action and practice, reclaiming the past for a stronger future. It is a work in which ancestor and descendant are reacquainted, where ancient practices and their sounds are not just revisited, but actively reborn and reworked. As past and future become one in the present, time dissolves in a transcendental celebration of unity”.

In his afternoon workshop, Rob will be demonstrating the traditional Māori musical instruments he uses in his sonic arts practice and teaching participants to play found instruments that they can take home with them at the end of the session!
Rob Thorne (Ngati Tumutumu) has been composing and performing music for over 20 years as a solo guitarist, singer-songwriter, in bands, and as a freenoise sound artist. His 13 years of work with taonga puoro (traditional Maori musical intruments) has been multi faceted, as a musician, a maker of the instruments, and as an academic, recently completing a Master of Arts in Social Anthropology on traditonal aspects of the koauau, a traditonal Maori flute.

Using loop technology, Rob intelligently blends the modern with the ancient, seeking to move toward the future while honouring the past. The sounds and musical structures give a glimpse of how the instruments may have been used compositionally while magically transporting us across dimensions of space and time. The long-length ambient compositions build slowly yet powerfully, relaxing the body while energising the mind and effecting a trancendental experience of spiritual proportions. The beauty of his work has only just begun to be recognised, recently receiving Creative New Zealand funding to record and album, and then having that picked up and released by the highly regarded Rattle Records!