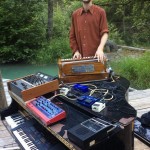 The Auricle Sonic Arts Gallery
Thursday January 22, 2014
From 7:00pm
Facebook event
Romain de Ferron is an experimental French musician. Deeply influenced by his studies on the classical European harmony and on the early American’s minimalists, he play during his concerts a music based on continuous sounds, counterpoints and repetitions elaborated from synthetisers, effects pedals, and voices.

Support from Paul Timmings and IRD