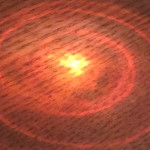 HearAfter is a contemplative and immersive pre-composed vocal work inspired by the life cycle, memory, and the process of decay. HearAfter is a pun on ‘hereafter’, which means ‘in the time to follow’ and is often associated with questions about experiences after death. With this in mind, the piece HearAfter, through the present moment of a listening experience, at one level might be heard to tap into memory – a sense of something past, gone, altered or retold, but at the same time could suggest a kind of anticipation of a future that is both factually certain yet remains unknown. While the human voice is often considered primarily as a communicator of words, I am artistically interested in its potential as sonorous, expressive and sculptural material. The sounds of breathing and an array of vocal gestures weave together with other abstract sounds into a collage of overlapping cycles and collisions. HearAfter has previously been presented as a vocal sound installation at the Gallery of Modern Art (Glasgow) and Ohrenhoch Gallery (Berlin).

« Back to Transnational Express