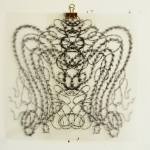 On the evening of the 19th of september and through the following days of the week-end The ladder is part of the pit will inhabit and activate the Auricle Gallery space with a curated multi-media show performing their glaciated collective sonic ritual prayer.

Friday evening:
Ōwheo cycle – film by kerian varaine
followed by live performances from:
Memory Burn (chch) & The Ladder is Part of the Pit

Additionally, over the Sat-Sun weekend the individual members will be exhibiting their own creative pursuits incorporating sound art, composition/improvisation, sculpture/installation, film, photography, with sporadic performances occurring throughout the period.

Joanna Osbourne
Joanna Osborne’s photographic practice has its focus on the search for coherence, through the lens of a 35mm SLR camera, upon constructed environments that explore the connectedness of matter and metaphors of light. She is a current PhD candidate at University of Otago, investigating potential interdisciplinary conversations between theology and art history. She began playing improvised cello with The Ladder is Part of the Pit at the 2013 Fringe Festival, Lines of Flight, and has recently picked up the tenor viol.

Motoko Kikkawa
As a violinist Motoko Kikkawa has been involved in many collaborative projects with musicians and performance artists from New Zealand and Tokyo and as a visual artist she has worked in various media over the years. Her current work explores the extension, into sculptural 3D spaces, of her intricately patterned paper cut-out works.

Kerian Varaine
Composer and sound artist who is also involved with the visual arts through writing scores and creating sculptural and electronic instruments. As a performer, Kerian is involved in many ensembles including playing banjo in Anarcho-folk band Whiskey and the Wench, and providing sound for the expanded cinema project Rubbish Film Unit.