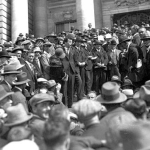 Paul Timings’ The Precessions of a Crowd is comprised of three segments from a field recording of the asset sales protest on 4 May 2012. Each segment is followed by a re-edit of the recording, which accentuates accidental and incidental sounds via repitition and time/pitch modification of common protest motifs. The composition seeks to blur the conceptual lines between protest and performance; crowd and individual; and political and personal. The aim of this is to comment on the role of protest and referenda as non-binding expressions of the people in a representative democracy.

In 2011 the New Zealand government proposed selling a proportion of its shares in five state-owned companies. In 2012 a coalition of groups, including opposition parties and non-government organisations, organised a series of protests and petitions against the policy, which ultimately resulted in a citizen-initiated referendum. While a 67.2 per cent margin expressed that they were not in favour of asset sales, the result was not binding on the government, and the asset sales went ahead.