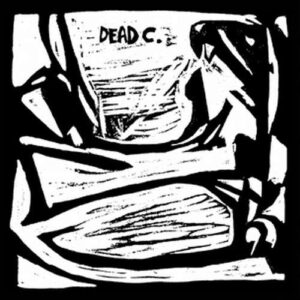 “In 1996 Bruce Russell released Le Jazz Non: A Compilation of Nineties NZ Noise on his Corpus Hermeticum label. Like other Corpus releases, this CD came in a beautifully designed and folded package, its rounded corners folded neatly like an invitation to a posh party. Its beautifully stained cardboard featured a quote from John Cage and a short meditation on New Zealand noise by Opprobrium zine’s Nick Cain. The compilation’s design was typical of Corpus releases, their fold-out cardboard layers making a distinct series that stood out from typical, mass-produced and plastic CD covers. In the same year, Russell’s band The Dead C released Repent (1996) on the U.S. label Siltbreeze, but here the design was a blurry, photocopied page pasted over another, obscured colour photograph on a digipack cover. When I received these albums through the post in the 1990s, I thought I’d got a bargain in the compilation and had been ripped off by The Dead C. To my ears, the grinding guitar noise of Repent wasn’t in the same league as the ambitions of Le Jazz Non, and it would be years before I learned that Repent’s pasted-over digipack cover was The Dead C’s previous album The White House (1995), salvaged from a record deal gone bad. Repent is in fact named for the repent the band had felt over getting involved with a record company that promised digipack covers.”

Darren Jorgensen enjoys drinking beer in tins and flying kites. He lectures in art history at the University of Western Australia, and is currently interested in esoteric art, postmodernism and rock music. Darren is an editorial advisor for Artlink and Eyeline magazines in Australia, and regularly contributes essays and reviews to these as well as Art Monthly Australia and Real Time. His recent book, co-authored with anthropologist David Brooks, is called Wanarn Painters of Space and Time: Old Age Travels in the Tjukurrpa (UWA Publishing) and is a study of paintings from an old age home in Australia’s Western Desert. He has previously published essays on post-industrial outfits Coil and Nurse With Wound, as well as Norwegian Black Metal. His PhD was in science fiction, and he has essays on New Zealand bands The Clean and The Dead C in process with academic journals.