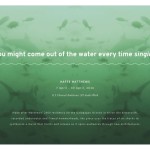 ‘Sharks are older than dinosaurs. They’ve evolved with the planet developing extraordinary perceptive mechanisms learning to navigate in straight lines at depths as great as 400m by tracing the shifts in the earth’s magnetic crust. They are still considered just to be extremely aggressive and are slaughtered in vast numbers for their fins to make soup. A shark in fact has to be one of the most sophisticated of earth’s animals.’ KM 2009

Developed after Matthews month’s residency on the Galapagos Islands (2009) in which she dived with, recorded underwater and filmed hammerheads, the piece uses the traces of six sharks to play six digital oscillators live, variably mixed with processings and underwater recordings making a music that thrills and relaxes as it spins audience through new architectures.

Sonic artist Kaffe Matthews was born in Essex, England and lives and works in London. Since 1990 she has made and performed new electro-acoustic music worldwide with a variety of things and places such as violin, theremin, wild salmon, Scottish weather, NASA scientists, bicycles, hammerhead sharks, school children, desert stretched wires and the BBC Scottish Symphony Orchestra.